Apple held its spring conference online today, launching the third generation of the iPhone SE, the new iPad Air, as well as new products such as the M1 Ultra and Mac Studio.

With the continuous increase and refinement of the product line, Apple’s spring conference has gradually become regular in the past two years, thus sharing some tasks of the June and September conferences, and speeding up the product update cycle to attract more users.

This spring conference can be said to have the largest number of new products in recent years, and it is also the most widely distributed product positioning, not only the basic models such as the iPhone SE, but also the cores that determine the direction of the product such as the M1 Ultra chip.

From the perspective of product positioning, this spring of 2022 is also the most important one of the spring conferences over the years.

Let’s start with the movie

At the beginning of the press conference, Cook first introduced Apple TV+ after a brief opening, and this part of the business has not yet entered the country. But as far as the content itself is concerned, “Apple Studio” has produced many excellent works in recent years, such as “Macbeth’s Tragedy” or “CODA”, which have been nominated for Oscar awards. 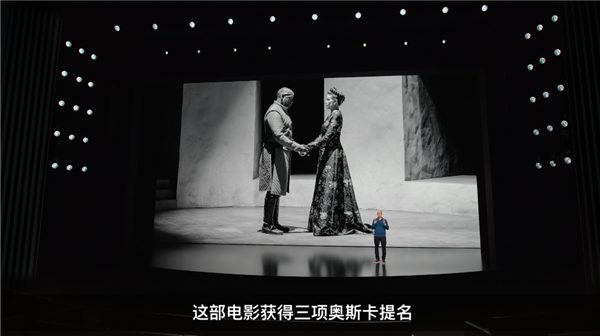 As part of Apple’s ecosystem, content itself is being paid more and more attention, which promotes Apple’s related businesses and continues to attract more users. 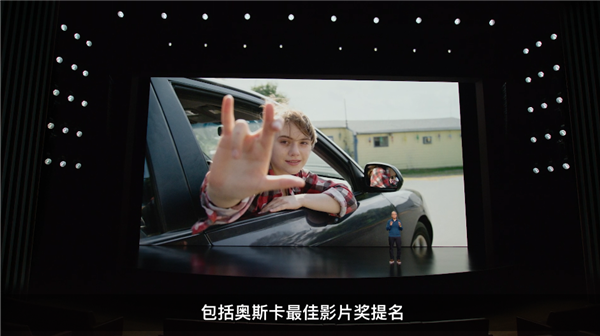 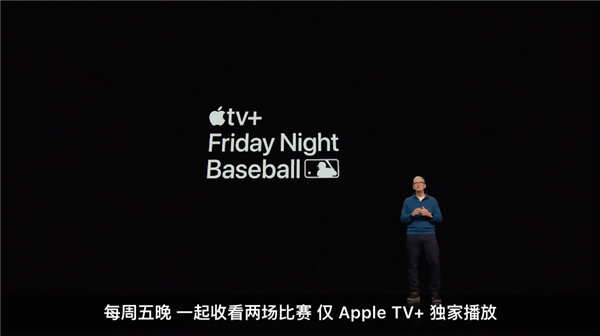 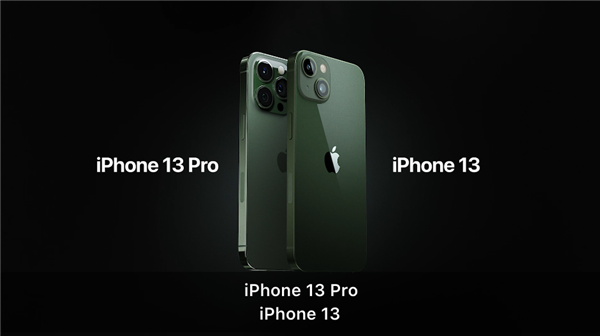 The new color matching of the iPhone 13 series is scheduled for this Friday and will go on sale on March 18. 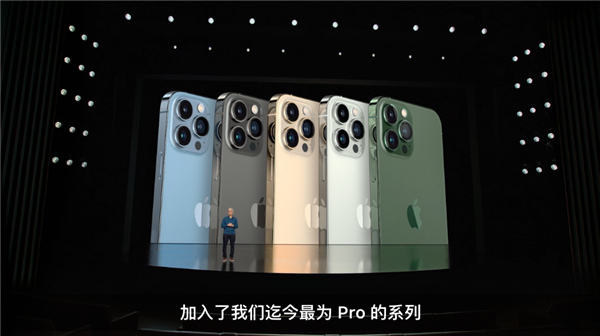 All generations of iPhone SE are based on previous products, and after the transformation to keep up with the times, as an entry-level product to expand the user base.

This generation of SE is no exception. The iPhone SE is still another magically modified version of the iPhone 8: it has been replaced with the A15 bionic chip, and its performance is on par with the iPhone 13 series; it supports 5G and conforms to the trend, which also allows Apple’s 5G mobile phone users to further explore. 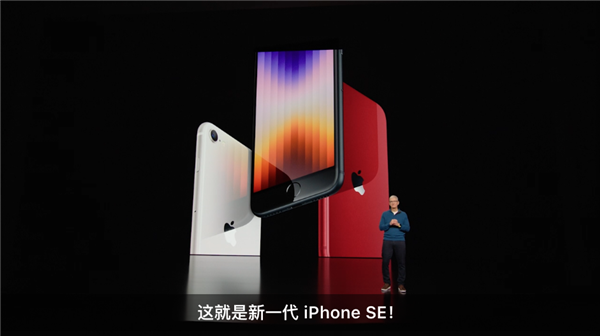 The A15 chip is once again the core driving force to advance the iPhone SE’s photography. It is still a single lens, but the photography has better depth of field, smart HDR, etc., which is obviously the result of computational photography; in addition, the recognition of text in images is also a computing power improvement. brought improvements. 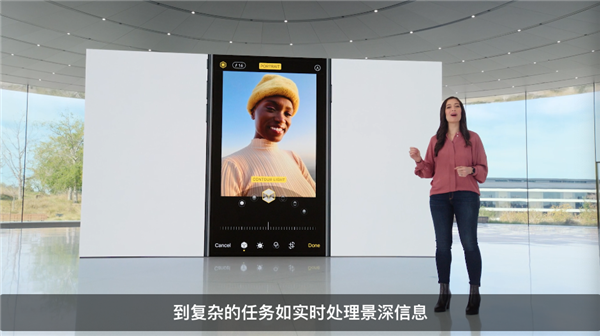 The official did not mention the battery capacity of the third generation of the iPhone SE, but said that the excellent energy consumption of the A15 is better than the battery life.

Others such as Touch ID, non-full screen, LCD material screen, etc. are basically the same as before. Another detail is the addition of the super-ceramic glass used on the iPhone 12, which improves the glass of this phone and makes it more drop-resistant. 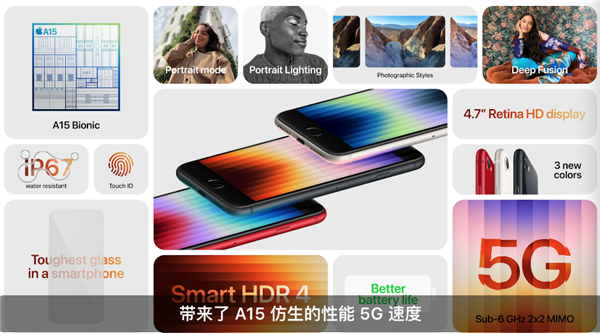 With the two items of A15+5G, plus the price of $429 (from 3499 yuan in domestic prices), the third generation of iPhone SE can meet the basic requirements of new users.

As for the appearance of the iPhone 8, some people will complain why it can’t be based on the iPhone XR, and there will be another group of people applauding it. They don’t particularly like Face ID, but they absolutely miss the fingerprint recognition method. The full screen is not the best solution for this group of people. Instead, the regular rectangle without bangs is better. In addition, the LCD material has no stroboscopic characteristics. For some people, all the shortcomings are just the selling point in the eyes of another group of people. 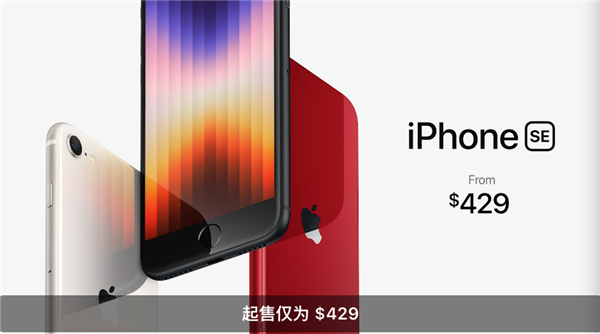 One thing that cannot be ignored is that the iPhone SE is a product for global users. Although Chinese mobile phones are mainly sold through retail channels, in Europe and the United States, more products are sold through operators and other channels. For the iPhone SE, the hardware itself is not too expensive. It is easier for merchants to customize flexible packages and attract more entry-level users.

Compared with the iPhone SE, the 2022 iPad Air is more like a regular upgrade, with the M1 chip replaced, the camera function has been enhanced, the shape design has remained unchanged, and new colors such as purple have been added.

In fact, since the previous generation, iPad Air has added colorful, the most simple and direct selling point, to give more people a reason to choose. 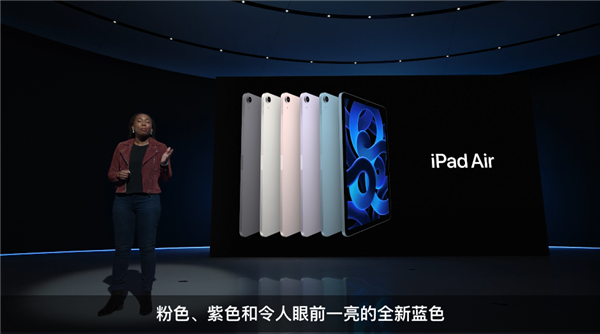 In other parts, the iPad Air is basically the same as the previous generation, such as the single-lens design, screen size, and the popular USB-C interface. 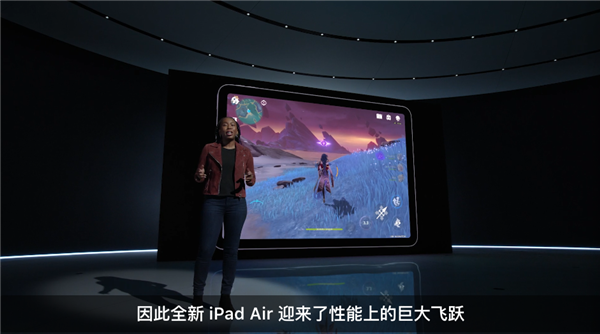 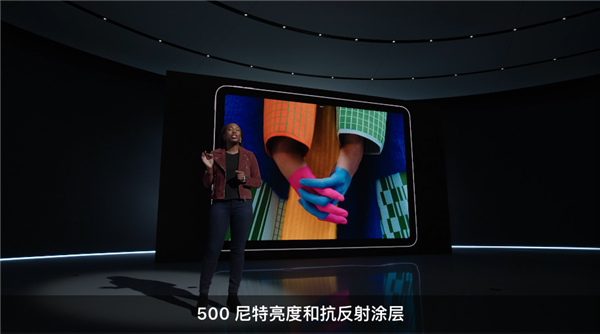 Because of its strong performance, Apple has also emphasized the productivity tool attributes of this product. The second-controlled keyboard and Apple Pencil have justifiably appeared on the screen of the conference. 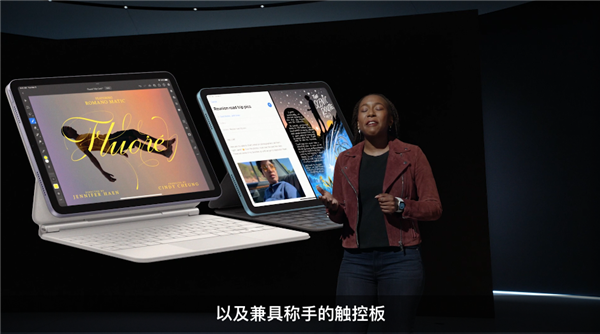 The iPad Air also supports a 12-megapixel ultra-wide front-facing camera, which is also the same as the iPad mini? 6, and supports characters in the play. Its rear main lens is expected to continue with a single-lens setup.

In addition to the M1 chip, Apple also added 5G connectivity (optional) to the iPad Air. This is also on par with last year’s iPad mini.

This update of the iPad Air, similar to the regular update logic of computer products, is a pure hardware upgrade. For the entire iPad series, the clarity of different categories such as iPad Pro – iPad Air – iPad mini – iPad is maintained, each with its own segmented market and users.

This chip is the soul of the spring conference and the core of a series of products that follow. However, its name is not the “M2” people expected, but the M1 Ultra. 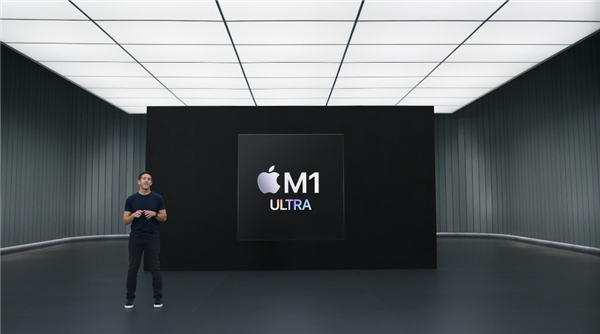 The shape of the M1 Ultra is unexpected, and it can be simply understood that it is “spliced” by two M1 Max chips. Johny Srouji, head of Apple’s chip division, said that the chip is linked together through a new packaging architecture, and the bandwidth between the two processors reaches 2.5TB/s.

In this way, the effect of doubling the computing power is achieved. 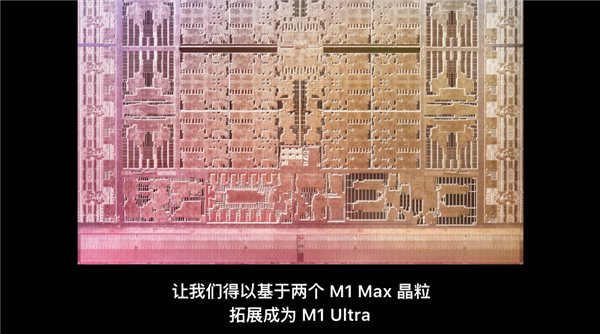 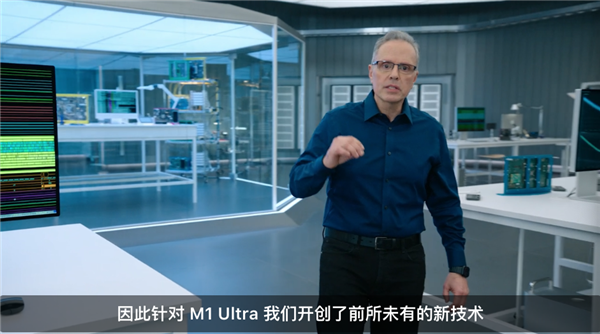 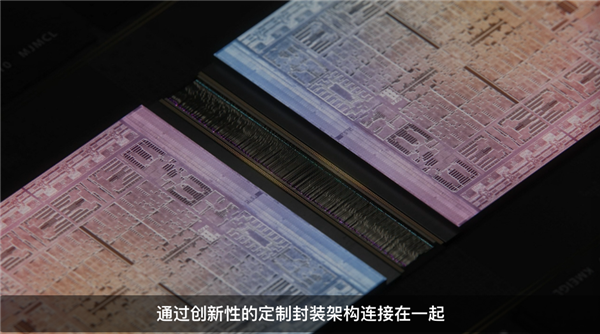 This way of splicing two chips into one piece seems to have never been seen in consumer electronics before. Because the performance of M1 Max is almost the strongest in the industry, after this splicing, most of its parameters have doubled.

The official mentions that it is still a 5-nanometer process, with 114 billion transistors, 20-core CPU, 64-core GPU, up to 64-core GPU, 32-core neural engine, 128GB RAM, and memory bandwidth of 800 GB/s. billion operations. 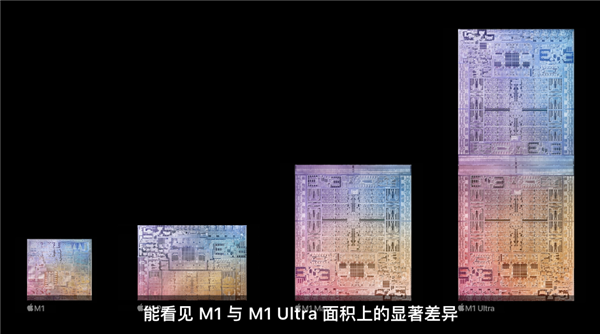 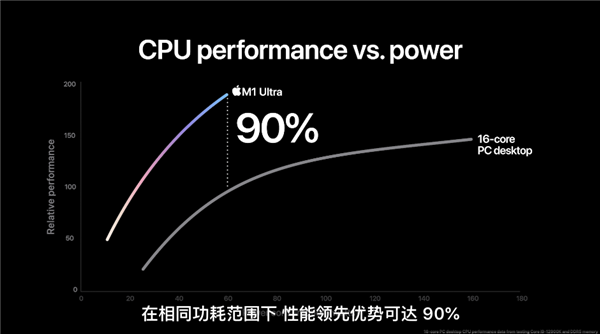 With such a strong chip, of course, a new machine must be used as a carrier, so Mac Studio is here.

It is also the finale of today’s conference, divided into the display part Studio Display and the host part Mac Studio. 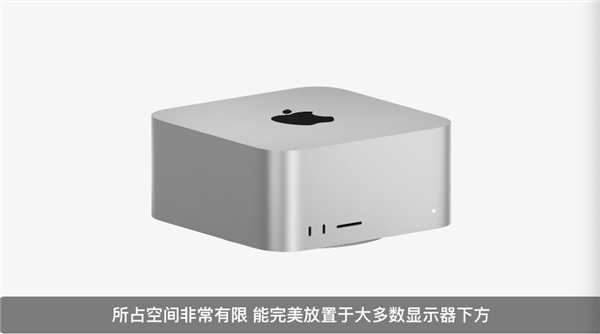 The shape of the Mac Studio is designed as a square aluminum box, as if the Mac mini has become fat, with two USB-C ports and a card reader port on the front, and four USB-C ports and two USB-A ports on the back. , power supply, network cable, audio port and HDMI output, etc. 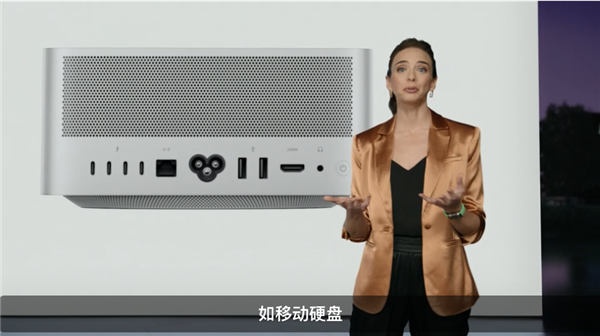 As you can see from the perspective view, the upper part of it is a huge fan, which forms an upper and lower air duct inside, which is used to improve the efficiency of this machine. 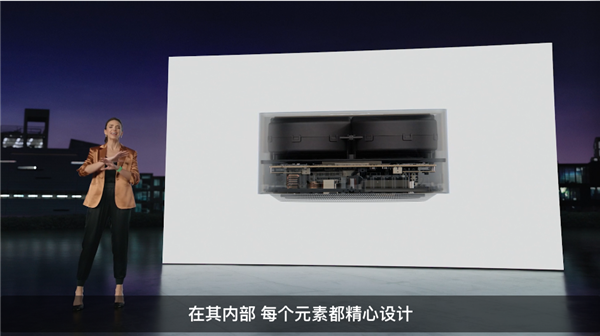 From this point, it may also be seen that the M1 Ultra is a chip made for desktop computers and has higher requirements for heat dissipation.

At least it looks like it shouldn’t be installed on desktops. 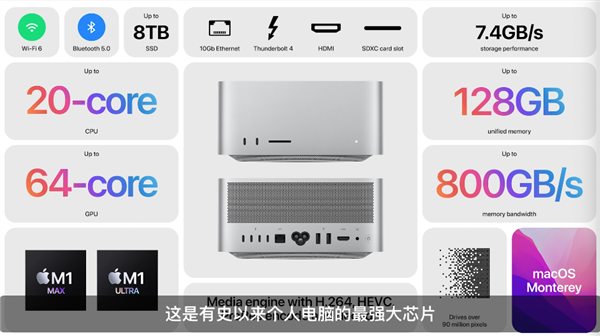 This machine, unsurprisingly, has become Apple’s second-strongest desktop computer (Apple has left a foreshadowing here). Mainly for video studio users. It is matched with a new A13 Studio Display built in.

This is the legendary Apple 27-inch monitor. 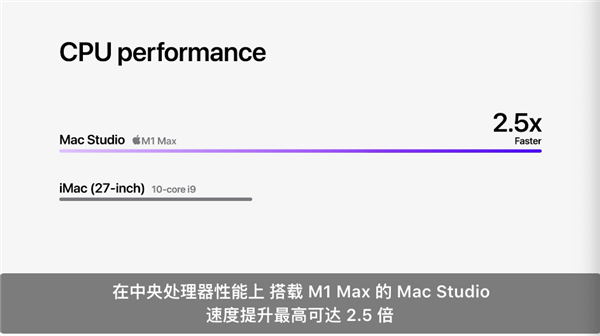 It has a standard 5K resolution, 600 nits of brightness, and a P3 wide color gamut. The 27-inch square shape is somewhat similar to the previous XDR, and the panel can be coated with nano-glass to prevent glare. At the same time, this monitor has six built-in speakers and supports the popular spatial audio function. 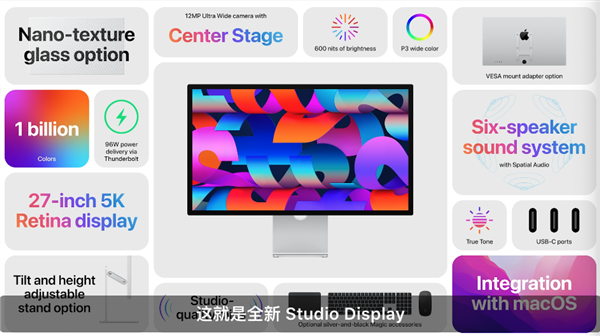 The role of the A13 chip was not mentioned too much at the press conference, only the 12-megapixel front lens was mentioned to support the centering function of the characters. 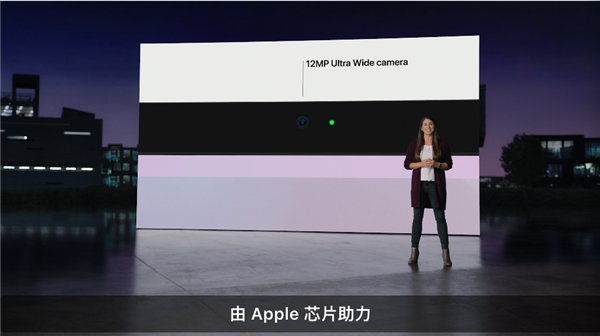 The M1 Ultra chip became the decisive factor. Some people may have thought that two chips could play like this before, but the data transmission bandwidth between them was not enough and could not be achieved. 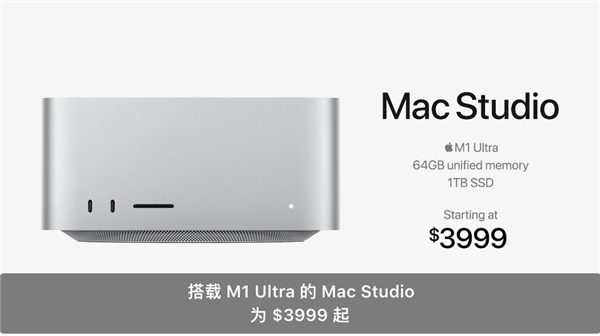 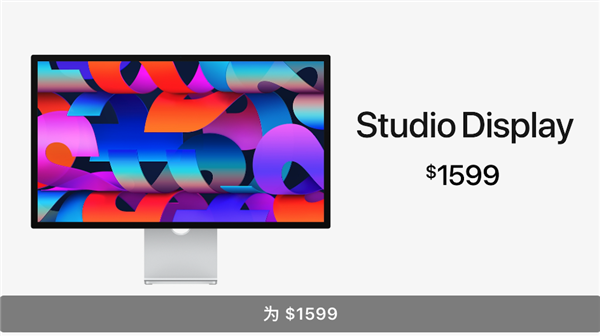 At the press conference, Apple mentioned that the transition from Intel to self-developed chips has been “almost successful”. ? 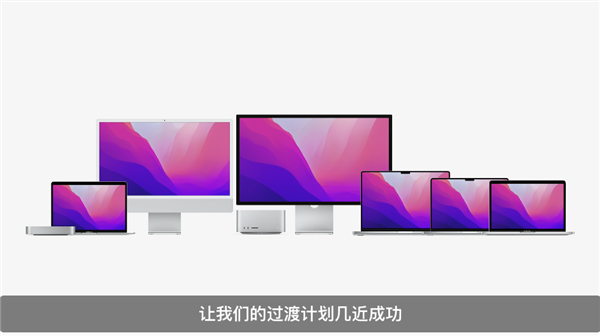 Because… Mac Stuido is not Apple’s strongest machine, and finally mentioned, “As for the Mac Pro, we will talk about it another day.”

We guess that Apple will take out the M2 chip next time and replace it with the Mac Pro, which is the real Apple’s strongest computer.

Summary: The best spring lineup of the year

Previously, Apple’s spring conference has always been a “non-essential” role. As a spare tire for the autumn conference, it often has a new product launch conference, and there is no update on the official website.

But this launch, because of the M1 Ultra and Mac Studio, made the original spare tire suddenly important. These professional-grade products break the law of only introductory products or regular updates at the spring launch. Perhaps in the future, Apple will also move towards a real two-year update. At the same time, the existence of iPhone SE, iPad Air and other products has not slowed down the rhythm of regular updates.

This spring will leave its own traces in the history of Apple’s conferences. It includes entry-level products like the iPhone SE, which are reserved for users with limited budgets; and Mac Stuido, which is almost the industry’s top presence, allowing high-end users to have More reasons to pay attention to the spring launch.